I wondered when someone would set up a "demonstration", "mock" or "fake" IRV election.  Kudos to Mike Ashe for doing it - because it showed the major problem with IRV:  It doesn't deliver majority winners!  In fact, in a 13-way IRV race, the winner had only 4% more votes than in the 2004 Supreme Court race that IRV replaced.

In instant-runoff race, your third vote's a charm

In a field of 13 candidates, Abraham Lincoln edged Thomas Jefferson 27-26, but that was beside the point.

Wait, I thought that the whole point of IRV was to elect a candidate with majority support?


Rather, the contest that Durham County Elections Director Mike Ashe staged the other day was meant to demonstrate a new twist in this fall's state elections: "instant-runoff voting."

"It's not complicated," Ashe said.

Oh no?  Did you ask anyone who witnessed the counting?  Sorry I wasn't able to be there, but I was a little under the weather that night.


It's not that simple, either - as evidenced by the special voters guide the state elections board mailed out last week and the how-to fliers that will be posted in voting booths on Election Day. For those who count the votes, as well as those who cast them, the race for a seat on the state Court of Appeals is going to be a new experience.

Yes - I was first in line on Thursday at 8:30 AM when Early Voting started in Wake County at the BOE HQ.  Other than me, my buddy Paul (7 times around the "Ring") Collins, and a Teabagger who claimed that he was the victim of voter fraud in 2008, none of the other 30 people in line even knew they were expected to rank their choices (90%).  And when I explained IRV to them, they all gave me that "what the hell are you talking about" look.


In that election there are 13 candidates, all listed in three columns side by side, and voters vote three times.

That is a good experiment - duplicates the 13-way Court of Appeals race.

What if you can't live with any of the other candidates, or you don't have enough information to make that decision?


Eventually, one candidate ends up with a majority, sort of.

"Sort of" a majority doesn't even begin to get close!

Ashe's demonstration started with 13 candidates "running" for favorite president and 100 ballots to be cast. Voters, in this case the handful of Durham citizens who attended, marked their first, second and third choices. Then the ballots were counted. In the real election, that will be done by machine.

But not on election night - it will take a week (or longer) for the State and County Boards of Elections to determine who the top-two winners will be.


Side note:  won't IRV be a big improvement on how we currently elect a President through primary contests and the Electoral College.  Can you see how well a 13-way or larger race for President made up of all the candidates on the ballots in January of 2012 would go?  If you think Florida 2000 pissed off lots of voters, can you imagine the HOWL of protest that would rise up when someone claimed to have won the race for President with only 27% of the vote?
Remember the 4-way primary race for Democratic Labor Commissioner in May 2008?  Mary Fant Donnen came in first right away, but it took almost 3 weeks to determine who the 2nd place finisher was.  Then and only then could the top-two proceed to the traditional runoff election on June 22.

Had that been an IRV election, election officials wouldn't have known how to sort the ballots and which 2nd and 3rd place votes to count until May 23rd of so, and then wouldn't have been done tabulating the IRV race (due to the record 36% turnout) until July 14th (Bastille Day) - two and a half weeks AFTER the results of the traditional runoff had been known.


No candidate got a majority, so the top two - Jefferson and Lincoln, with 13 votes each - were in the "instant runoff." Ballots on which neither Jefferson nor Lincoln got a first-place vote were discarded, then the second-place votes were counted for each. In the real election, that will be done by hand.


In the second round, Jefferson picked up four more votes and Lincoln, 12.

OK - this gives us a total of Jefferson 17 and Lincoln 25 - Lincoln wins.  Why bother going on?


Those ballots were discarded and third-place votes for each tallied up - nine for Jefferson, two for Lincoln.

No - dammit - those ballots were NOT discarded - otherwise how could you count the 3rd place votes?  If IRV is that hard for what I presume to be a college-educated reporter to describe correctly, how well do you think that voters with literacy problems will be able to understand it?

Have you taken a look at the literacy levels across the state lately?  The levels were not good nor were they getting better ten years ago.


Adding all together gave:

So in reality, the 2nd round of this practice IRV election gave us the winner in the 2nd round that was confirmed in the 3rd round.  Why go to the extra trouble to sort, stack and tabulate those extra votes?  We already don't count all the other 2nd and 3rd round votes!

State law requires the instant-runoff method when an office is vacated after the candidate-filing period for the next election has closed. The General Assembly passed the law in 2006, after state Supreme Court Justice Bob Orr unexpectedly retired too late for a primary. A special filing period ended with six candidates running, and the winner got only 23 percent of the vote.


This year, Appeals Court Judge Jim Wynn was appointed to the federal bench after the filing period, leaving a vacancy to be filled this fall. Thirteen candidates signed up, making an instant-runoff mandatory.

No - we could have had a traditional runoff election and gotten a real majority winner.  Or the State Board could have stated we weren't ready to do statewide IRV in November 2010 (and they were right) and just do plurality because it will result in the same winner - as this election proved.  There are already laws on the books to resolve ties - so why jam an unfunded mandate to use jury-rigged IRV?


Early voting opened Thursday and runs through Oct. 30; regular Election Day is Nov. 2. If one of the 13 Court of Appeals candidates has a majority once all the votes are in and certified Nov. 12, the election is over.

A 1st round 50% plus one vote majority winner in a 13-way race?  That ain't gonna happen - you read it hear first!


If not, the state elections board will determine who is No. 1 and No. 2. Then each county counts up those candidates' second-place votes; and then the third-place votes; and reports them. A winner will then be certified.

A winner with a larger plurality than in the 1st round.  But it damn sure won't be a winner with 50% plus one of all the 1st column votes.


In relatively small Durham County, Ashe said, hand counting could be done in two days or so; in a large county such as Wake, it could take a week or more.

Bull - Wake BOE Election Director Cherie Poucher was heard at a BOE meeting a few weeks ago telling people to  cancel or postpone their turkeys.  If the November 2010 turnout is the same as the May 2008 turnout, we could be looking at getting a winner in the statewide IRV race on the 12th day of Christmas!

And it will be just as easy to count those IRV votes as it is to keep track of all the stuff your true love gives you in that song!

Posted by Chris Telesca at 9:36 AM

Subscribe to Statewide IRV: ClusterF@#k to the Court of Appeals by Email

This is your election on IRV! 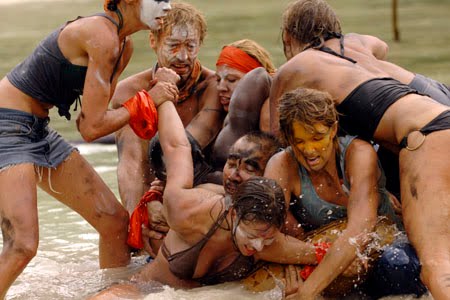